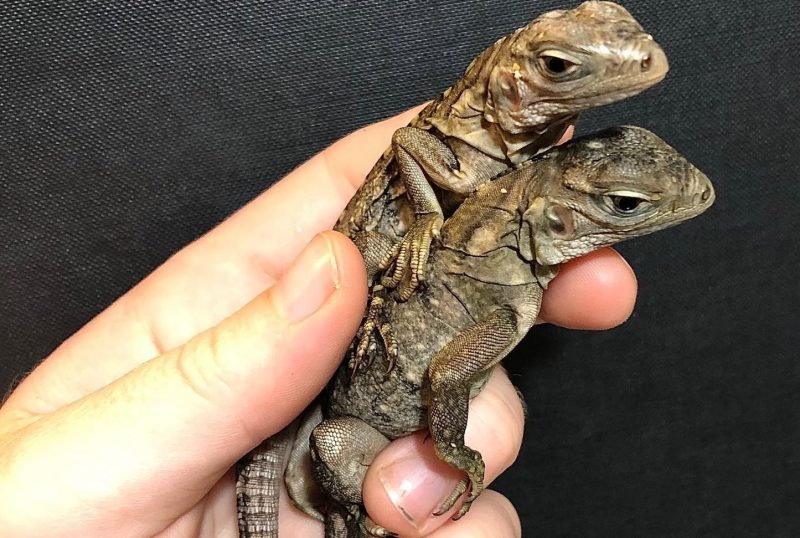 Press Release: Once in a Blue Moon

The arrival of twin blue iguanas was a special highlight of the recent breeding season at Blue Iguana Conservation facility. This is a rare occurrence in reptiles and, although not the first time for blue iguanas, it is still a special occasion. As hatchlings, the twins were very vulnerable due to their small size, weighing less than 15 g at the point of hatching, the equivalent weight of one AAA battery! Now 6 months on, the twins have steadily grown and become stronger, surviving the heavy rains during hurricane season and now have their own personalities.

Iguana Warden, Peri Smalldon, expressed his excitement: ‘The twins were a real surprise for the team as you can never expect two hatchlings in the same egg. The survival of the twins given their small size was against the odds, particularly during the 2020 hurricane season, however, we are very proud of this achievement by the BIC team and it is a positive news story to share during what has been a tough year for everyone’.

The twins of Grand Cayman’s endemic blue iguanas can only be viewed during the guided tours at the Blue Iguana Conservation facility, which includes special access to the Blue Nursery. Please note, self-guided tours of the facility do not include nursery access. Guided tours: Adults CI$20.00 and Children CI$10.00. Proceeds from ticket sales directly benefit Blue Iguana Conservation. Tour pass includes access to the QEII Botanic Park.

To read more of our press release click here.