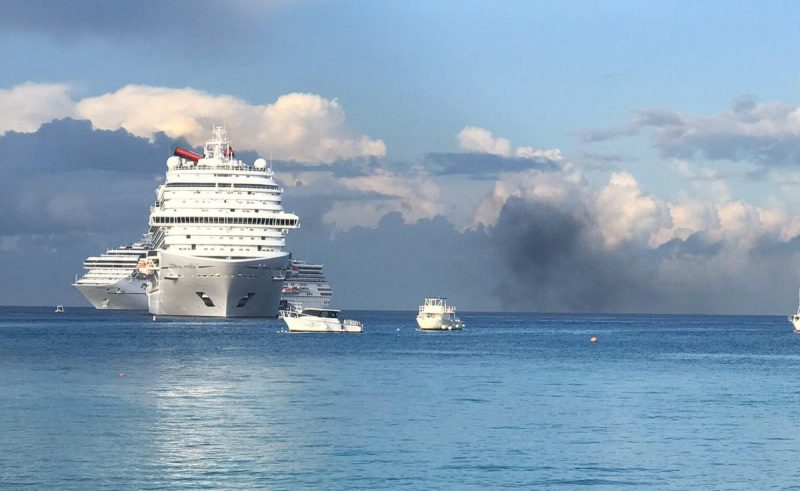 The National Trust for the Cayman Islands is following closely ongoing discussions regarding the proposed cruise ship berthing facility. The National Trust issued statements in October 2015 and October 2018 expressing its concerns with the project’s impacts on sites of environmental and historical significance.

With the new designs now released, the National Trust met with representatives of Verdant Isle Port Partners, the preferred bidder consortium for the project, to learn more about the revised project plans. The National Trust appreciates the time and information that they have provided to date.

Nevertheless, the National Trust remains concerned about the potential damage to our unique marine environment by the proposed facility, as well as the potential loss of two historical ship wrecks which have themselves become artificial reefs. The National Trust is disappointed that its recommendation that an independent Environmental Impact Assessment (EIA) be carried out based on the new plans, is being ignored. Baird, although a reputable company, is now part of the consortium and is therefore not independent and thus cannot address questions of conflict.

The 2015 Environmental Statement (ES) concluded that the coral relocation programme would not achieve “no net loss” if they removed 15 acres of coral reef habitat and that indirect impacts such as elevated turbidity and sedimentation levels would potentially affect an additional 15-20 acres of coral reefs. The original ES went on to state that a further 650 feet either side of the original footprint could be affected.

The new proposal estimates that 12 acres of our coral reef area will be impacted, of which Verdant Isle Partners will attempt to relocate approximately 10 acres. Of significance is the fact that the area in question is presently alive and thriving. There are 60 species of corals, some rare and endangered, which are currently protected under the National Conservation Law.  Over 400 species of fish, and hundreds of species of marine organisms that produce shells and skeletons (for sand) have been recorded. This incredible biodiversity in the reefs and surrounding areas will be impacted.  Cayman’s coral cover has reduced from 21% to 15% over the last 20 years owing to stress from rising sea temperatures and ocean acidification associated with climate change, coastal development and overuse. Adding a further human-made stressor to the equation makes our reefs less resilient to natural changes beyond our control.

There is much debate surrounding the efficacy of coral relocation. Coral relocation and coral restoration are vastly different concepts with varying success rates and attempts at relocation are not guaranteed. Displaced coral will be trying to recover and thrive in an unfamiliar area and mortality rates of relocated versus reattached coral based on recent studies in the Caribbean, are high. Even Verdant Isle Partners do not dispute that relocation and cultivation will not fully mitigate the amount of coral and biodiversity that will be lost.  The coral reefs in our harbour have taken thousands of years to form and cannot be so easily replicated. It is therefore misleading to suggest otherwise.

It is impossible to fully identify the effects of the sediment that will, once displaced, be continually resuspended by vessels using the facility, and by the maintenance dredging that will possibly be required over the years. How far and in what direction will this sediment travel on our currents, and how will coral and other marine life be impacted in its wake, remain grave concerns. What will be the consequences of major storms on Hog Sty Bay during construction or afterwards?  With the change in design and further modelling, we have been informed that there is potential for lesser overall impact which is positive. The National Trust understands that further analysis needs to be carried out to wholly assess the potential ramifications and determine what is truly at risk in the long term. Most of the data collection for such analysis will not commence before March 2020.

Two historical shipwrecks – the Balboaand the Cali– will be impacted by the port project. The National Trust understands from Verdant Isle Partners that the intent is to relocate the Balboato an unconfirmed site 1 km away from its current location. Relocating the Wreck of the Caliwas not previously considered and remains uncertain, so the effects of the project on this site are as yet unknown. While relocation may preserve certain aspects of these shipwrecks, the cultural and historic significance of the Balboaand Caliare inherently linked with their physical locations. Moving either wreck will result in the loss of this historical significance in addition to the loss of marine life which has reclaimed these ships as artificial reefs over the years. As with the relocation of substantive coral reefs, successful relocation of shipwrecks is dependent upon the integrity of the structure and the feasibility to move and reposition sections relatively intact.

The National Trust has been safeguarding the Cayman Islands’ environment and places of historical significance for over 32 years and currently protects over five percent of its environmentally sensitive land for present and future generations as well as several historically significant properties. It has helped save the endemic and endangered Blue Iguana from extinction and it stands proud of all its achievements to date. The National Trust remains fully committed to preserving all that makes the Cayman Islands unique.