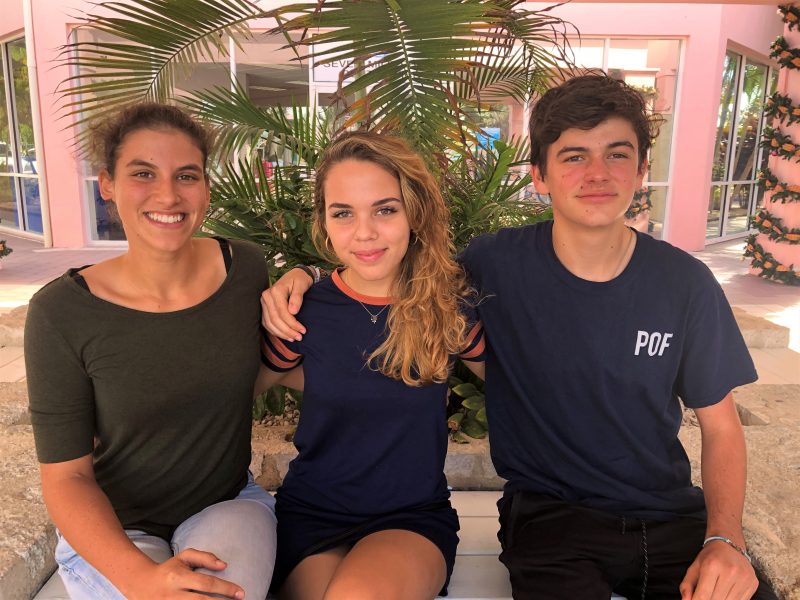 Three young students from the Cayman Islands will be attending the 2019 United Nations Climate Change Conference COP25, taking place on December 2-13 in Madrid, Spain. The students will be part of an International National Trust Organization (INTO) delegation that will draw attention to the importance of heritage conservation when meeting the challenge of a changing climate.

The National Trust for the Cayman Islands lobbied INTO asking that youth from island nations that are set to suffer some of the worst effects of climate change be included in the conference and INTO agreed, donating three passes for young representatives from the Cayman Islands. The students attending will be Steff McDermot (UCCI), Connor Childs (CIS), and Olivia Zimmer (University of Tampa), all of whom have been actively involved in local environmental activism.

To be as well-informed as possible regarding the Cayman Islands current position on climate change, the students met with CUC regarding the National Energy Policy, GreenTech about renewable energy, and DoE on the existing, but currently unimplemented, climate change policy. The students are eager to connect with other young people from around the world (perhaps even Greta Thunberg) and bring home their new-found knowledge to help the Cayman Islands prepare for the inevitable effects of climate change.

Olivia says, “I am incredibly fortunate to be able to represent the Cayman Islands at the United Nations Climate Change Conference in Madrid. It is my goal to approach the conference with an open and optimistic mind in order to return home with knowledge and ideas that will allow Cayman to continue to grow in a cleaner and more sustainable way, subsequently contributing to the well-being of the world as a whole.”

“I’m so excited to attend this conference and feel honoured to be chosen,” Connor comments. “I’m looking forward to learning what other countries around the world are doing to prepare for the effects of climate change so that I can bring that knowledge home to help Cayman prepare for future challenges.”

The United Nations Climate Change Conferences are yearly summits held by the United Nations Framework Convention on Climate Change (UNFCCC), where countries from around the world meet to coordinate a response to climate change. Beginning in the mid-1990s, major agreements have been negotiated at these gatherings including the Kyoto Protocol and the Paris Agreement. This year, crucial climate action work will be undertaken in areas that include finance, forests, agriculture, technology, loss and damage, indigenous peoples, cities, and oceans. A key objective of COP25 is to raise overall ambition with respect to the Paris Agreement as many countries are not meeting their targets for emission reduction.

As the global climate emergency intensifies and carbon emissions continue to grow, governments have been urged to move forward quickly to stabilize greenhouse gas concentrations in the atmosphere at a level that will slow dangerous human impact on the climate system, in a time frame which allows ecosystems to adapt and promotes sustainable development. Patricia Espinosa, Executive Secretary of UN Climate Change said: “If we stay on our current trajectory, it’s estimated that global temperatures could more than double by the end of this century. This will have enormous negative consequences for humanity and threaten our existence on this planet. We need an immediate and urgent change in trajectory.”

United Nations climate change conferences have grown over the past two decades and are now among the largest international meetings in the world. Participants include officials from governments all over the world, at all levels, as well as large numbers of representatives from civil society, NGOs, and the global news media. It’s a great honour for our students to be included in the INTO delegation to this United Nations conference. Several local businesses and individuals have stepped forward to sponsor the costs for the students including CUC, The Flowers Group, the Lodge, and CIS teachers. Additionally, the Luijten family will donate a large area of mangroves through Island Offsets to be protected in perpetuity with the National Trust as compensation for the emissions associated with the travel.

If you’d like to help with sponsorship, email protectourfuturecayman@gmail.com.