The Sister Islands Rock Iguana (Cyclura nubila caymanensis) is native only to Cayman Brac and Little Cayman and is classified as a subspecies of the Cuban Iguana (Cyclura nubila nubila). Similar in body form to Grand Cayman’s Blue Iguana, the Sister Islands Rock Iguana is a large iguana capable of growing to more than 20 pounds in weight. It varies in colour from almost black to grey or brown, with local highlights in orange, cream and sometimes a little blue, but never blue on the spines or all over the body like the Grand Cayman species. 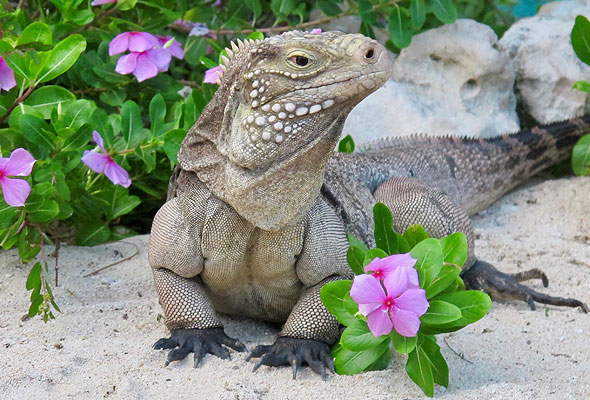 Once abundant on both islands, the Sister Islands Rock Iguana has been almost wiped out on Cayman Brac, suffering extreme losses to free-roaming dogs and feral cats. Now only a small population breeds at one location on Cayman Brac’s southern coast platform, while adults are often sighted near the West End Public Park; these adults were translocated from Little Cayman, a practice which is now illegal.

On Little Cayman, less than 2,000 Sister Islands Rock Iguanas remain. They generally congregate around the built-up areas in and around Blossom Village.

A project led by the Durrell Wildlife Conservation Trust, in partnership with the Cayman Islands Department of Environment and Blue Iguana Conservation, has assessed the risks facing the Sister Islands Rock Iguana and has found that the pressures that led to the near-extinction of the Grand Cayman Blue Iguana – development, wild animals, vehicular traffic and human population – are now present on Little Cayman as well. Feral cats are a common threat, eating the young iguanas before they mature; domestic dogs are also being allowed to run free, which threatens the breeding adults. Road kills are disturbingly frequent now, and the first large-scale habitat destruction is becoming evident as residential subdivisions start to creep across the landscape. Feeding by humans compounds the problem, as the iguanas are drawn out of the wilderness and into the highest threat areas. 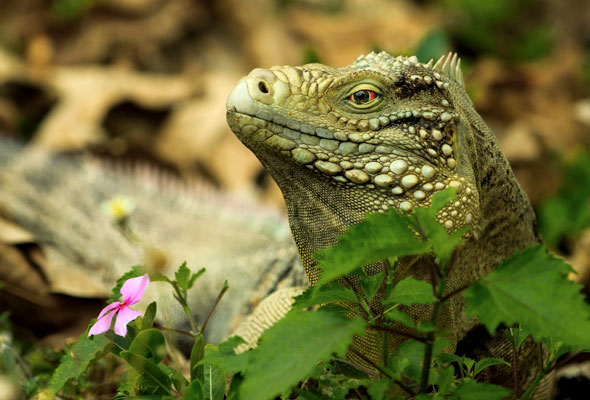 The information gathered during the research project provided much-needed insight and confirmed the need for active preservation of the species in order to prevent a population crash like that of the Blue Iguana and, therefore, avoid the need for another major recovery effort. In 2011, we – along with the the Cayman Islands Department of Environment, the International Reptile Conservation Foundation, Inc., and local stakeholders – launched a species management plan for the Sister Islands Rock Iguana which details the strategy necessary to increase the population, as well as the deadlines and parties responsible for various action items.

Like the Grand Cayman Blue Iguana, the Sister Isles Rock Iguana is strictly protected under local and international legislation and should never be handled except for authorised conservation work. It is illegal to capture or move iguanas from any of the three Cayman Islands and it is important to keep the Blue and Sister Islands iguana populations separate on their own respective islands, as they naturally should be.