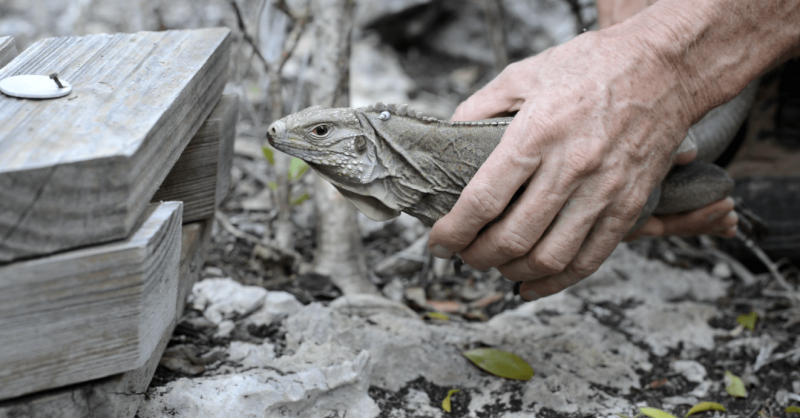 The National Trust for the Cayman Islands is very proud to announce that the 1,000th Blue Iguana was released into the wild on Monday, July 23, 2018.

Number 1,000 – dubbed “Renegade” – was released at approximately 5:45pm into Colliers Wilderness Reserve. Renegade was able to start his new life in the wild after being given a head-start at our specialist breeding unit at the Queen Elizabeth II Botanic Park in Frank Sound. The Blues, including Renegade, that were released into the wild were micro-chipped and fitted with colourful bead markers for future identification purposes.

The Blue Iguana Recovery Programme is very proud to have bred and raised such a robust and healthy animal, but this release was decades in the making and would have not been possible without the assistance of hundreds of people and numerous organisations. Renegade was one of 10 iguanas released on Tuesday, signifying a valuable addition to the recovery efforts for these once critically endangered animals.

It has taken many years of labour and dedication to finally reach this milestone of 1,000. Now that marker has been reached, the Blue Iguana Recovery Programme is looking to the future of preserving the Blue Iguanas through further sustained releases and with an increased focus on the monitoring of the wild population.

With around 50 more releases planned for this year, coupled with mounting evidence that the wild population are actively breeding, the Blue Iguana Recovery Programme and its partners can finally rest a bit more comfortably knowing that these unique reptiles are no longer teetering on the brink of extinction. However, they remain on the endangered list and new threats continue to emerge so constant vigilance is required.

The Blue Iguana Recovery Programme is now moving into Phase II whereby more funding is required for research to ensure that we can maintain the genetic diversity that is essential for the survival of this species in the wild. There are also several iguanas that due to old age, injury or other health reasons will never be able to be released and so the National Trust is working hard to ensure their living conditions are as natural and as safe as possible.

Please consider donating to the programme or sponsoring and naming an individual iguana.