The Brac Parrot Reserve encompasses 282 acres of contiguous protected land that is dominated by pristine, ancient dry forest on a very rough and rocky terrain. A great diversity of native trees support breeding pairs of the Cayman Brac Parrot (Amazona leucocephala hesterna) as well as other forest birds such as the Red-legged Thrush, White-crowned Pigeon (“Bald Pate”) and Black-whiskered Vireo. In the winter months, the reserve is also filled with neotropical migrant songbirds, escaping cold northern climates. 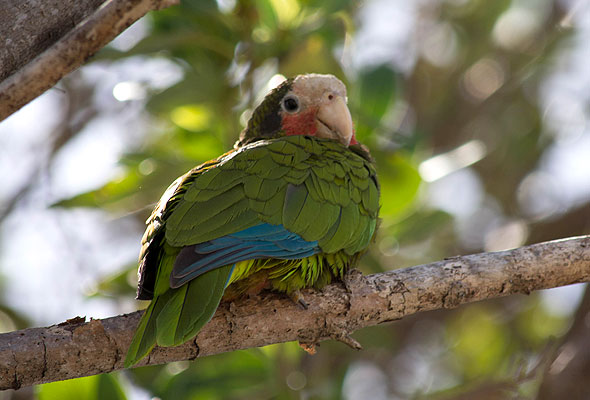 The Cayman Brac Parrot is slightly smaller than the Grand Cayman Parrot (Amazona leucocephala caymanensis), although its colouring is very similar. Both have iridescent green feathers over the body, a white eye-ring, red cheeks, black ear patches and brilliant blue wing feathers which are only obvious when the bird is in flight. The tail has blue outer edges, with some red and yellowish green underneath. The Cayman Brac Parrot also has a pure white forehead and a large maroon area on its abdomen.

Parrots are often seen and heard in the early morning and late afternoon. They nest secretively in tree cavities, and feed on the fruits and seeds of the forest. When resting quietly in the heat of the day, they are almost perfectly camouflaged among the leaves of the trees. It is this behaviour that has earned the Cayman Brac Parrot the nickname “Stealth Parrot”.

Although now found only on Cayman Brac, the Cayman Brac Parrot also used to inhabit Little Cayman but was wiped out in the Storm of 1932 when the hurricane destroyed all the large trees with good nesting cavities.