Towards the end of the 1800s, the Eastern Channel in Gun Bay was designated as a port of entry to East End. Much business was conducted there under the guidance of William Conwell Watler, who gave clearance to vessels arriving in and leaving East End on fishing and turtling expeditions, and to ships bringing in freight and mail. In those days, the exports of the islands were mainly thatch rope, mahogany and turtle products which went chiefly to Jamaica. 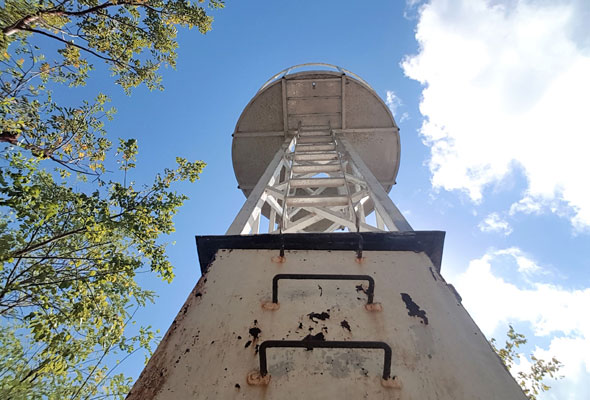 The first lighthouse on Grand Cayman was erected at Gun Bluff in the early 1900s, which is approximately a half-mile from the present site of the East End Lighthouse Park. This was required under the Justices and Vestry’s East End Light Law (1906). A 60-foot ship’s mast stood on the Bluff and William James Watler was hired as a lightkeeper to ensure that a kerosene lantern was hoisted to the top of the mast at 6:00pm every evening and lowered at 6:00am every morning. A fine “not exceeding forty shillings” was to be imposed on him if it was discovered that he had been lax in his duties. The light could be seen 10 miles out to sea.

By 1918, the need for a more substantial structure was recognised and a French engineer named Terrier was appointed to oversee the project. Land at Gorling Bluff was leased from the Conolly family and a new lighthouse was built, along with a storage shed to hold drums of kerosene. The site was ideal, as it was the highest point in the district and commanded a fine view of the local reefs. The new lighthouse was constructed of a steel cylinder mast that supported a wheel-like wooden frame, which held a kerosene lamp with three wicks. Two Lighthouse Attendants were appointed to maintain the lighthouse: Austin B. Connolly and Police Officer Captain Elliott Conolly.

The lighthouse at Gorling Bluff served until 1937, when the British Government gave order for five modern “navigational lights” to be erected around the coasts of all three Cayman Islands. The lights were to be placed on Crown Property, however, so that same year the Crown acquired Gorling Bluff. The replacement lighthouse was constructed by Mr. Morell from England, and it is this light which serves to the present day, though it is now solar-powered. Part of the wooden frame of the previous lighthouse remains, but the old kerosene lamp is now in the Cayman Islands National Museum.