The Watler family cemetery in Prospect, Grand Cayman dates from the early 19th Century, but we believe that the cemetery was being used well before this. It became the custom in the 18th and 19th centuries for inhabitants of the Cayman Islands to set aside a portion of their family land for a graveyard. In fact, several such plots still exist around the islands and many continue to be used today. 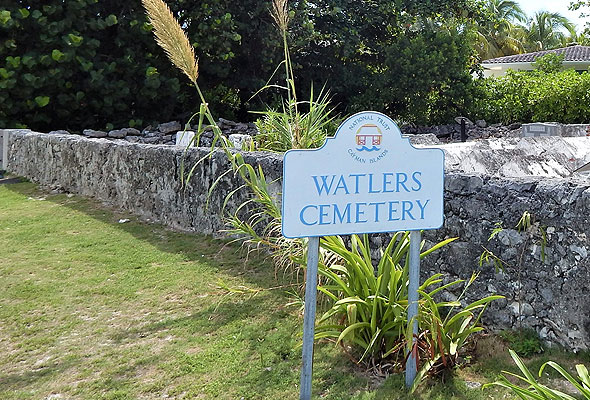 In 1991, the Watler family donated Watlers Cemetery to the Trust so the historic house-shaped monuments, which were faced with crushed coral and limestone daub unique to traditional Caymanian construction, could be preserved in perpetuity.

The unique grave markers sit atop a stone slab, protecting the simple wooden casket that lies beneath from all but the fiercest storms. It is likely that wood was chosen in preference to stone because the local people were skilled carpenters, not stonemasons.

A mahogany panel would have been set into the walls of the house-shaped monument with an inscription of the name of the deceased. Sadly, many of the markers have disappeared over the years and others have become illegible.

These unusual gravestones are found throughout the Cayman Islands and similar grave markers have been found in England and Wales, dating from mediaeval times; in other parts of the Caribbean, similar markers date back to the early 1600s.

More modern gravestones occasionally mark the resting place of more than one person. This was not the case with older graves, although the groups of gravestones are very close together, as their occupants were, after all, from the same family. Due to the climate in the Caribbean, it was essential that bodies were interred with speed and sometimes a grave was dug in readiness, with no specific person in mind.

An old stone wall encloses Watlers Cemetery. Though now filled in, the original entrance is still somewhat visible (opposite the present entrance), as is some mortar and daub patches used to repair the old dry-stone construction.

Family graveyards in the Cayman Islands are frequently beachside because sand is much easier to dig than the inland island rock. The few areas of soil found by the settlers was also needed to grow crops and were not sufficiently deep to accommodate graves. It should also be noted that it was only in the 20th Century that beaches were considered an asset; early settlers preferred to live away from the threat of storm damage and flooding, which beaches represented.