Nurse Irskie Leila Yates (1899-1996) was a revolutionary nurse, beloved midwife and resident of West Bay. Her home was built by her parents, Arthur and Jacintha (Jessie) Yates, in 1917 after their original home was destroyed by the hurricane of that year. 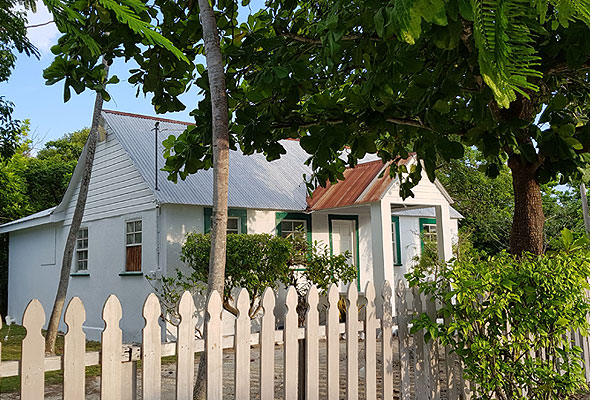 The following year, Nurse Leila began her nurses training and walked to George Town every Monday and Friday to attend classes. She carried out her first midwifery case single-handedly in 1921 and went on to deliver over 1,000 babies, either in the mother’s home or her own, before the Government opened its hospital in 1952. During that time, she never lost a baby or its mother.

Her home is over 100 years old and is said to be the first wattle and daub home in the Cayman Islands to have glass windows installed, which caused great excitement at the time among the neighourhood children, whom Nurse Leila recalled gathering outside to peer through the panes. The house was originally situated on Boggy Sand Road, West Bay but was moved to its present site in 1917 due to beach erosion and damage from a hurricane.

The Trust acquired the property in 2006, 10 years after Nurse Leila passed on. In 2019, extensive and much-needed repairs to the home were carried out, including restoration of the original wattle-and-daub walls in the customary white-wash colour and the rebuilding of its traditional zinc roof.

There are hopes to reopen Nurse Leila’s home as a medical museum in the future, recognising her contributions to health care and midwifery in the Cayman Islands.