The Eldemire House in Cayman Brac was donated to the Trust in 2005 from the Eldemire family: Mr. Philip Charles Eldemire, his wife Georgilla and their eight children, Melrose, Merrick, Delaware, Dorson, Benson, Coburn, George and Bruce. It was constructed in 1928 by Cayman Brac labourers utilising local and imported materials. Only five years after, the Storm of 1932 struck Cayman Brac and devastated the island, destroying all but 11 homes in its path. 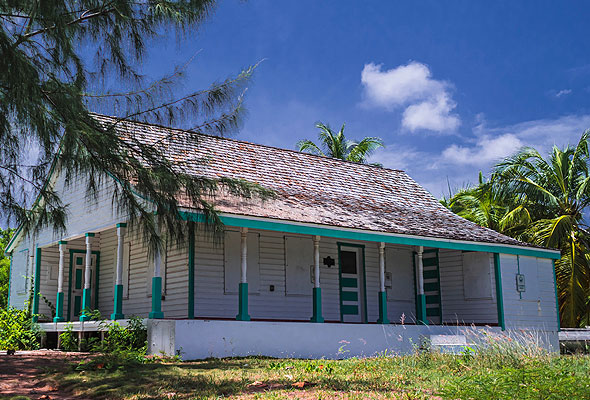 While the house was washed off its posts, it remained standing after the storm’s passage because it had been wedged against the cistern and kitchen, saving the lives of the 34 people who took shelter there.

After the debris had been cleared, the home became a centre of the community as one of the few remaining buildings and people from Creek and Watering Place were able to get food and support from the Eldemire family.

The Eldemire house remained a community centre of sorts for many decades as it was one of the first houses to be wired for a generator, which Merrick Eldemire, the eldest son, did in 1946; by then, he was a fully-trained engineer. A few years later, his brother George also became an engineer and outfitted the building with modern plumbing.

Unfortunately, the house received further damage in Hurricane Paloma in 2008, three years after the family donated the home to the Trust.

In 2012, the home was restored to its former glory following extensive cosmetic and structural restoration efforts and thanks to contributions from Seth Arch and Jim Scott, and the financial assistance of Maples, Jacques Scott and William Reid.